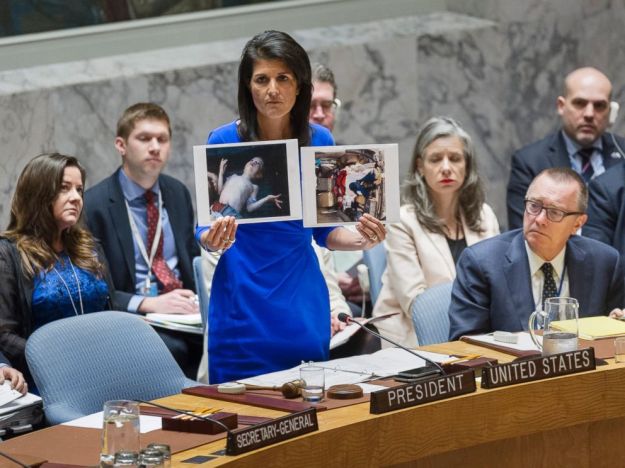 It must now be a prerequisite of those who become an American ambassador to the UN to possess certain characteristics and traits, the most important of which are rabid warmonger, child killer, and outright liar.

Remember it was Madeleine Albright when asked about the US blockading Iraq which prevented medicine and medical equipment from entering the country that resulted in the estimated death of a half a million children who coldly responded: “I think that is a very hard choice, but the price, we think, the price is worth it.”  Then there is Colin “Weapons of Mass Destruction” Powell who told a bald-face lie about Iraq’s nuclear capabilities which paved the way for the US destruction of the country.

In her brief tenure as UN ambassador, Nikki Haley is fulfilling these requirements quite nicely.  Her latest crazed outburst came on the heels of the bizarre White House press release about another supposed Syrian government gas attack which warned President Assad that he would “pay a heavy price” if carried out.*

While the State and Defense Departments were apparently caught off guard by the White House action, Ambassador Haley was not (probably given advanced notice) and issued an even more provocative tweet:

Any further attacks done to the people

of Syria will be blamed on Assad, but

also on Russia & Iran who support him

killing his own people.**

Not only has Haley appointed herself judge, jury and executioner of the Assad regime, but her wild accusation includes reprisals to the neocons’ ultimate targets of Russia and Iran.  Her ridiculous statement has now given Syria’s enemies the green light to conduct another gas attack which will be blamed on Assad and his allies, Russia and Iran.  Nice work, Nikki!

From a diplomatic perspective, the entire affair was bungled and amateurish, confirming once again that the Trump Administration is out of its league in conducting foreign policy.

That Haley was even chosen to become part of the Trump Administration has been odd from the beginning, but as things have unfolded quite telling.  Haley was a vociferous critic of the future president.  She, and the likes of another war-monger and Russophobe, Lindsey Graham, were consistently attacking candidate Trump for being “soft” on Russia and his immigration stance especially his wildly popular border wall proposal.  To Haley and Graham, Donald Trump was out of step with the Republican Party’s values such as diversity as represented by Haley who, herself, is of Indian heritage.

Yet, despite all of the vitriol heaped at candidate Trump, the newly elected president, in a surprising and ominous move, decided to make the South Carolina governor, UN ambassador.  This, and a number of other selections to foreign policy posts, signaled that President Trump would abandon his promises and vote-garnering campaign talk of peaceful coexistence with Russia, a reduction of US presence in the Middle East, and in other hot spots across the globe.

While Haley has been an ardent warmonger from the start, President Trump did not have to select her for the post.  There were other more competent and surely less belligerent candidates available.  More than likely, the choice was probably a nod to his “advisor” daughter Ivanka, to curry favor among feminists.

While President Trump’s pick of Haley was an implicit betrayal of a large segment of his base, his foreign policy actions since becoming chief executive have been an explicit rejection of putting America first which he spoke of at his inaugural.  From escalating tensions with puny North Korea, dropping the mother-of-all-bombs on Afghanistan for no apparent reason, to making multi-billion dollar armament deals with the despots of Saudi Arabia among other troubling endeavors, Trump’s foreign policy is little different than his infamous predecessors.

While it looks like President Trump may have won the war, at least temporary, over the press and the anti-Trump Congressional forces about the fake Russian election involvement, he and his bellicose UN ambassador are now using the same underhanded methods to instigate a conflict to depose President Assad.  While the alternative media rightly showed how the mainstream press and politicos made up and manipulated stories to undermine President Trump, it should now be intellectually honest and call out the president and his UN ambassador for what they are doing in Syria.  In doing so, it may prevent the outbreak of WWIII.