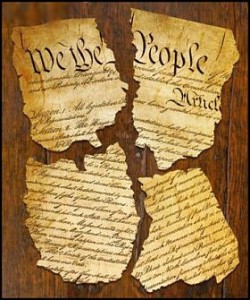 In the midst of the seemingly indeterminable presidential electoral campaign, some of the candidates have been asked about the possibility of convening a constitutional convention in the hope of addressing the nation’s most pressing issues, most ominously the gargantuan federal deficit now in excess of $18 trillion.

Governor John Kasich supports such a notion with the explicit purpose of passing a balanced budget amendment.

Mark Meckler, president of Citizens for Self Governance, a leading group pushing the idea, believes that “If it starts to become a serious presidential issue, we could get it done in 2016.”*

Not all presidential contenders are on board with the idea. Senator Marco Rubio has expressed trepidation over the possibility of a convention for amending the current document fearful that it would lead to a total rewrite:

Unlike most issues on which he pontificates, Senator Rubio is this time right in his analysis, but most likely for the wrong reasons.

The original Constitutional convention was called to “revise” the supposedly defective Articles of Confederation, but by the time the deliberations (more like arm twisting, threats, and bribes) were over, the Articles had been replaced by a brand spanking new document. The Constitution granted the central government far more power than it had before while the individual states had, in effect, lost their cherished sovereignty and had become mere appendages within the new “federal” union.

Under the current ideological climate, the convocation of another constitutional convention would not return the nation to its halcyon days as a confederation of independent states, but would more than likely increase the central government’s power at the expense of what is left of state and individual rights. The idea of amending the current document is naïve at best, but more importantly a gigantic waste of time.

Groups like Citizens for Self Government do not grasp the essential problem of American political, social and economic life. It is the Constitution itself that is the cause of the myriad of problems which besiege the land. The adoption of the Constitution despite what its sycophantic champions of today and yesteryear have erroneously argued, created a highly centralized national state which is virtually limitless in its power.

The Articles of Confederation, on the other hand, were just that – a system where the national government was dependent for its existence on the individual states’ benevolence. American constitutional history can be seen as the systematic destruction of state, regional, local and, eventually, individual sovereignty from the aggrandizement of federal power, all achieved under Constitutional rule.

The Constitution negates one of the great safeguards of individual liberty – “voting with one’s feet.” Under a confederation of states, tyranny can be avoided, to an extent, by simply relocating to another political jurisdiction. If a state becomes too confiscatory in its taxing policies, its subjects can move to a less tax burdensome district. Thus, the more political jurisdictions there are the better.

Under the Constitution, there is no escape from its dictates unless one expatriates. The ability of populations to move and the greater number of political units provides a far superior check on tyranny than the supposed “checks and balances” and “separation of powers” so celebrated in American federalism.

Amendments, conventions, “strict interpretation” of the Constitution, and all other reforms of the federal system will do nothing to limit or eventually slay the American Leviathan. Decentralization is the key which means secession and a dismantling of the Union.

Secession should not be limited to the Union, but allow for the breakup of the existing states along political, economic and cultural lines. States as geographically, culturally, and economically diverse as California should be broken down into numerous smaller entities. The overriding principle in regard to liberty and prosperity is the greater number of political configurations the better.

Until the Constitution is seen for what it truly is, the rapacious federal state will continue to gorge itself on the ever dwindling productive efforts of its citizenry. Once this is recognized and efforts are taken to disembowel the beast, will the lives, liberties, and property of Americans and a great many around the globe be secured.

5 thoughts on “Another Constitutional Convention: An Idea Whose Time Has Not Come”