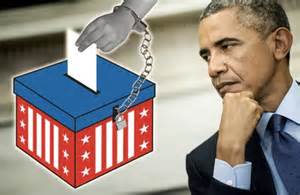 As if there have not already been enough signs pointing to a future totalitarian America, President Obama’s recent remarks on “mandatory voting” is further evidence of what is in store for those who continue to remain within the confines of the former “land of the free and home of the brave.”

In lamenting to a civics group about the amount of money which now accompanies most elections, Obummer suggested that mandatory voting requirements “would be transformative if everyone voted. That would counteract money more than anything.”* Naturally, he did not mention the vast sums of cash that the Obama re-election team spent during the 2012 presidential campaign, some of which has been estimated to have been on the north side of $40 million greenbacks!

The Dictator-in-chief uttered more hypocrisy when he suggested that the young, lower-income groups, immigrants, and minorities were being kept from voting by Republicans in some states: “There’s a reason why some folks try to keep them away from the polls.” While there has never been a shred of evidence of Republicans or conservative groups keeping any eligible voter from the polls in any recent election, there is plenty of eyewitness accounts and video footage of Obama’s re-election team’s Stalinist employment of black thugs in certain Philadelphia precincts intimidating white voters in the last presidential election farce.

Such a scheme coming from an avowed statist as Obama who brought coercive health care to America should be of no surprise. Yet, this is the natural outcome of social democracy and if trends are not reversed, compulsory voting will become a part of the U.S.S.A’s political landscape.

The two criminal, oligarchical political parties that have run this country into the ground over the last hundred years or so understand that mandatory voting will further legitimize their corrupt rule. With it, people will be forced to participate in the bread and circuses that the American political process has become, including the grand hoax that is conducted every four years to determine which demagogue will weasel and lie his or her way into the highest office in the land.

More fundamentally, if mandatory voting becomes a feature of American political life, it will mean that the modern democratic state born during and in the aftermath of the French Revolution will have achieved one of its most cherished goals in its quest at becoming mankind’s foremost “god.” Mandatory voting will require citizens (“subjects”) to pay homage to the state-god through the “sacred” process of voting. At such a point, its suzerainty will be nearly complete.

While critiquing Obummer’s latest draconian scheme is necessary, alternative and counter measures need to be proposed. Short of scrapping altogether the current constitutional republican system and returning to a more preferable one of a “confederation of states,” the following reforms (as a start) should be enacted to curb confiscatory mass democracy:

First, instead of enlarging the franchise, it should be severely limited with significant property qualifications for voting. Age requirements should be increased to at least thirty years. U.S. Senators should once again be appointed by state legislatures. Also, anyone who receives public monies, be they government contractors, welfare recipients, bureaucrats, elected officials or teachers, should be prohibited from voting. This would also include employees of the Federal Reserve and its member banks.

Above all else, the idea that voting and democratic elections are synonymous with freedom and liberty must be debunked. Mass democracy needs to be ideologically demystified as a force for social good and seen as a grand redistributive engine of wealth from the productive to the parasitical classes. It remains the greatest threat to private property, individual liberty and global peace that mankind faces.

Proponents of mandatory voting like Barack Obama need to be ridiculed and driven from the positions of power they hold for advocating such tyrannical notions. Mandatory voting is a bad idea whose time will hopefully never come.